What is noise cancellation and how does it work?

A noise-canceling microphone is a microphone that is designed to filter ambient noise from the desired sound, which is especially useful in noisy environments.

This technology ensures that the microphone is not equally sensitive to sounds from all directions.  This type of headset is ideal for noisy, open offices and will filter out most background noise as long as the microphone is relatively close to the user’s mouth. 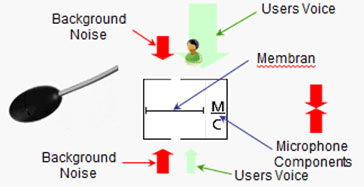 The microphone’s diaphragm is placed between the two ports; sound arriving from an ambient sound field reaches both ports more or less equally. A sound that’s much closer to the front port than to the rear will make more of a pressure gradient between the front and back of the diaphragm, causing it to move more.

Therefore, you need to put some distance between you (with the microphone clipped on you) and a source of noise around you. This is to ensure that the gradient of your voice is louder than the noise.

For example, you need to stay as far as you can from a barking dog because of the farther the distance for the dog, the lower the barking sound. A low barking can easily be eliminated by the level of your voice, thus canceling out the dog’s barking.  In addition, if for some reason, you need to be closer to the dog, make sure you speak louder so as to provide enough gradient to eliminate the barking of a nearby dog.

Also, external lapel microphones were designed to be sensitive, so adjusting the sensitivity of the microphone could have varying effects on the noise-canceling properties.